Every year for the last 40 years, about 1,400 food/beverage companies exhibit their latest and existing packaged food and beverages at San Francisco’s Winter Fancy Food Show. Navigating through and around this 3 day Trade Show with the nearly 20,000 attendees and over 200,000 square feet of space is both exhilarating and exhausting.

California is a trailblazer and was represented at the show by having the most exhibitors with 440 food companies. One of the busiest sections is the Dairy area. There are lots of predictions on where food will trend or go for 2015, but the California Dairy industry as a whole has pioneered good practices from the beginning through sustainability, reducing the carbon footprint, humane treatment of their producers (animals), and giving back for the greater good.

Jennifer Giambroni, the Director of Communication for the California Milk Advisory Board, represents 1,500 family dairy farms in California. These producers make milk, butter, ice cream, yogurt, cottage cheese, and cheese for 21% of Americans nationwide. The California Milk Advisory Board’s main goal is to preserve and sustain these small Dairies for future generations. Many of these Dairies are already 3 to 4 generations old.

Because California has the most stringent environmental standards in the United States, it was hardly a surprise when two of their producers received national sustainability awards. An example of good sustainable practices is how these California Dairies will recycle water up to 4 times; it is especially important with an ongoing drought.

The farmer’s mantra is to feed the world. They have been working with Food Banks to bring in the most requested and most difficult item …Milk! Refrigerating Milk has been an overwhelming challenge for the Food Banks, so through http://milklife.com/give, California Dairy Farmers will contribute in 2015 over $100,000 by giving the families in need accessibility and availability to product.

Back in the 1960s Goat Dairy products were fringe and were not so popular. The Bice family left the bustling and sprawling city of Los Angeles, for cleaner air and greener pastures. In the late 70s Jennifer Bice, the oldest of 10 siblings put goats on the map and in the mainstream markets. They sell organic Goat Dairy products like: Goat Milk, Kefir, a variety of Cheeses (Smoked Cheddar, Raw Milk Feta, French Style Rind Ripened Cheeses), and Yogurt. 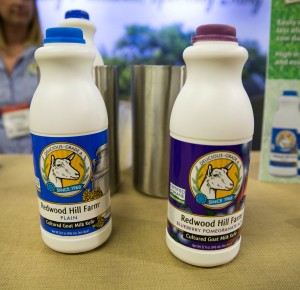 Jennifer is a world renowned goat breeder, and she was responsible for making Redwood Hill Farm the first Goat Dairy to be certified Humane. Every Goat has a name and is treated like a pet. As they have grown and demand has increased, they have had to source from outside of their Farm; these high standards and certifications for Humane Treatment are naturally expected from their local suppliers.

With 2 acres of solar panels, Redwood Hill Farm has been reducing its carbon footprint for decades. 85% of their production is solar powered. Also, Jennifer drives an electric car charged by their solar power. No longer fringe, Goat Dairy products are sought out because its easily digestible, lactose friendly, and delicious. As this business began to grow, customers pushed Redwood Hill Farm to make completely lactose-free Dairy Products giving birth to a whole new company.

In the rural and fertile part of Sonoma County, it is home to the oldest running Cheese Company in the United States. Marin French Cheese makes French Style, soft-ripened Cow Milk Cheeses. This 150 year old Cheese Company has land that has remained in the same family for 125 years and after that, it was run by 2 other families in the last 25 years. The Thompson family used to have their own cows grazing on 700 acres of land, but in the 1930’s, farms hit hard times and they sold their herd. The Thompsons concentrated on cheese making by sourcing their milk from neighboring Dairies that were no further than 15 miles away. To this very day, all their milk sourced locally.

These traditions of sustainability, animal care, and being good stewards of the land are good practices that remain apart of the Marin French Cheese culture. In January 2015, Marin French Cheese was honored by the Good Foods Awards for their fresh unripened Brie, a Breakfast Cheese that has been a stable of their brand for over 100 years. Through working with local Dairies that produce “happy cows,” they are able to buy the highest quality milk for cheese making. These dairies are committed to their cow’s nutrition and animal welfare by factoring in the footage for each cow during its life; animals roam on the beautiful Marin County hills, which come through naturally in the flavors of the cheeses that Marin French Cheese produces.

Over the last five years, Marin French Cheese has started to reintroduce diversity to their 700 acre ranch with partners, like: pig farmers, organic row crops, beekeepers (the honey can be found at the retail store), and allowing neighboring ranches to use the land for grazing.

As an establishment in the community, Marin French Cheese continues to give back by supporting the next generation. They encourage healthy eating through donations to the North Bay Children’s Center for preschooler’s nutrition, and are supporters of MALT easements (Marin Agricultural Land Trust), even though they are not a recipient of funds.

Marin French Cheese at 150 years old remains grounded in tradition, yet looks forward to their continuing passion as a strong player in the bustling American artisan cheese industry.

Packaging up this dairy focused blog, Califia Farms is a plant-based and a dairy alternative, which produces almond milks, citrus juices, aguas frescas, and iced coffees. Califia was founded in partnership with Sun Pacific, the maker of Cuties, in order to use leftover products to start a line of tangerine juice. Founder of Odwalla, Greg Steltenpohl, created Califia to serve non-GMO, California plant-based drinks. They have recently launched a line of creamers – original, Pecan-Caramel, Vanilla, and Hazelnut as a tastier and healthier alternative to artificial pre-existing options.

Beyond the product, Califia is also on the sustainability bandwagon. Their manufacturing facility in Bakersfield reuses water, repurposes 90% of their byproducts, and 100% of their packaging is recycled and recyclable. Their CEO, Greg Steltenpohl, is an advocate for Almond farmers cooperatives and sits on the Almond Board. Califia is a big supporter of the Xerces Society, a non-profit for nurturing bee diversity and conservation.

In the near future, Califia will be launching a line of cold brewed coffee, and relaunching protein almond milk with sprouted brown rice and pea protein mix. They also hope to bring organic products to the marketplace soon.

Dairy and Alternative for Good

Turns out Dairy good practices have been part of the fabric of farm and ranch life for generations. Although the show has ended, more new specialty food items will be lining store shelves soon and the consumer gets to decide what will be the trendy new foods for 2015. Next blog will focus and highlight more food businesses providing greater good(s) and practices.

See our Pinterest Board of the 2015 Winter Fancy Food Show.