Once upon a time, those who sought to live a healthier lifestyle were called “Health Nuts.” They shopped for natural products that could only be found in Health Food Stores. Now, healthy products are so mainstream that they can even be found in vending machines and convenience stores. The Natural Products Expo West is a trade show of epic proportions, drawing nearly 3,000 exhibitors and over 70,000 attendees in 3 days; it may (in fact) attract more crowds than nearby Disneyland.

Since browsing through the aisles of innovative natural product booths at the Anaheim Convention Center was an overwhelming experience, we decided to narrow it down with the following question to businesses we spoke with, “What is the most creative use of your product?” Here’s what they had to say….

After spending a decade traveling around the world, Thierry Ollivier, founder and CEO at Natierra, started his own superfood company. Their website is full of recipes for their Salts, Hemp Seeds, Goji Berries, and Chia Seeds. Here are few unusual uses of their product that you won’t find on their website.

Take a half a bottle of wine, put in chia seeds, wait a few days, then drink it.

Eda-Zen: Mix it up or Top it off

Edamame, also known as young soybeans, originated in Southeast Asia. This nutritious food has remained a staple of these cultures for over 2,000 years. Black edamame, rich in antioxidants, high in protein comes from Japan. Eda-Zen decided to bring over regular and black edamame seeds from Japan to grow it domestically in Arkansas for Americans to enjoy as a snack. Their edamame is organic, Non-GMO,  toasted, and seasoned.

Mix it into frozen yogurt to bring out the sweet and salty flavors, or try dipping it in chocolate! For those slightly less adventurous, replace croutons with Eda-Zen in salad or soup.

Coconut is a vital part of both the diet and and the economy of the Philippines. Supporting the local farmers with their sustainable, organic and natural coconut products, NuCoconut has developed specialty coconut oils, chips, and vinegars. Their liquid coconut oils has the consistency and versatility of olive oil, and it tastes good in marinades, used for sautéing, dipping with bread, and salad dressing. 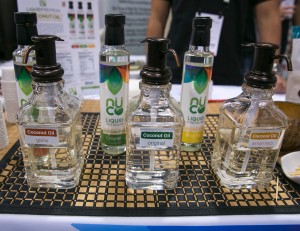 Try using their oils as a moisturizer or for makeup remover. For those wanting to sex up their love life, it makes a great lubricant (anti-bacterial, anti-viral, and all natural)!

Once a cook at the world-class restaurant, French Laundry, Mikey developed savory and sweet paleo, gluten-free muffins. They are 100 calories and come in three pre-sliced varieties (original, toasted, and cinnamon raisin).

In the style of English-muffins, Mike’s Muffins makes for a delicious bread pudding and ice cream sandwich. For those who are pure paleos, pair it up with some coconut ice cream!

Miyoko’s Kitchen started when founder, Miyoko Schinner, recreated a range of flavors and textures that she had once enjoyed from dairy cheeses (before becoming vegan). Several years of experimentation culminated into the publication of her groundbreaking book, “Artisan Vegan Cheese,” which she hopes would inspire others to make their own vegan cheeses. From there, it was only a matter of time before Miyoko’s Kitchen was born.

A Meltdown
Miyoko’s Kitchen’s Sharp Farmhouse melts down into cheese sauce for mac and cheese. Their Winter Truffle Cheese is perfect in a risotto, while their Double Cream Chive delivers creamy mashed potatoes.

The humble beginnings of health food were once fringy, but now it is breaking new grounds, lining the shelves of major supermarket-chains nationwide. Some of these food companies are paving the way for the next generation of “Health Nuts” and are even pushing the creative boundaries of their own product uses.